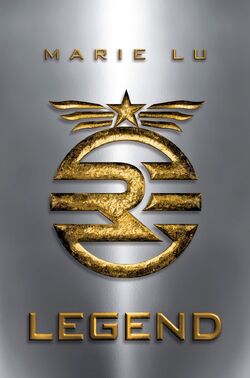 Last week the Middle School Bookclub met during lunch to discuss Marie Lu's dystopian novel Legend.  This book was very popular with the 12 students between the ages of 10 and 14 who came to the meeting.  In Legend, the United States has broken apart and the western section of the continent is now know as the Republic.  To win its ongoing war against its neighbor, the Republic tests all children at the age of 13.  Those who do well go to military training schools; those who do not succeed are sent to government labor camps and never heard from again.  June was born into an elite military family and it is no surprise that she earns the highest score ever on the exam.  Day comes from a poor neighborhood with few opportunities to get ahead.  After he fails his exam, Day escapes his fate and becomes the most wanted criminal in the Republic.    When June's brother is murdered, Day is the prime suspect.  She goes undercover to find Day, but when she learns more about the government's role both their lives, June and Day form an important bond.

Here are our discussion questions:


1.  The events of Legend take place over a hundred years in the future. What do you imagine the United States will be like a century from now? Do you think it could resemble the fractured country in Legend?

2. What do their relationships with Tess and Thomas mean to Day and June? Why do you think Day continues to travel with Tess? What did you think of Thomas when he was first introduced? Why did June trust Thomas?

3. After learning the truth about Day, why do you think the government treated him the way they did?

4. How did you feel about the romance between June and Day?  Do you think there is too much romance in dystopian novels or does it work well with the genre?

5. Is there anything from Day’s memories of his childhood that hint at what John will ultimately do for his brother on the day of Day’s planned execution?  Were you surprised by the ending

6. What would Legend have been like if only Day or June narrated the book? If you had to pick a character other than Day or June to narrate Legend, who would it be and why?

7. What role does the plague have in Legend? How is it symbolic?

8. Near the end of Legend we learn that Day’s pendant is an American quarterfrom 1990. Why is this coin symbolic? What other symbols appear in Legend?

9. What do you think the book’s title means? Who or what does “legend” refer to?

10. Legend is the first installment of a trilogy. What do you think is in store for Day and June in the next book in the series?  If you have read Prodigy, did it live up to your expectations?