Review: Perks of Being a Wallflower 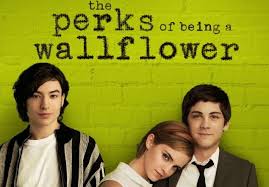 In honor of Banned Books Week, I  reread Stephen Chbosky’s cult classic The Perks of Being a Wallflower to see how it has stood up over time.  In this short, epistolary novel, Charlie is a socially awkward teenager, fearful of entering high school.  His only friend has recently committed suicide, and Charlie feels his family does not really understand him.  He becomes friends with Sam and her stepbrother Patrick, a pair of seniors who take Charlie under their wing and introduce him to all that is ugly and beautiful in high school.  Charlie’s coming-of-age journey also includes a young teacher who supplies him with great literature to read and write about outside of class. As Charlie watches the world spinning around him, he struggles with his ability to “participate.”  His lingering depression coupled with a fear of upsetting others make it difficult for Charlie to figure out who he is and what he wants in life, but literature and friendship help him grow in small, believable ways.

My feelings for this novel have changed little over the years, though I have developed a greater appreciation for Chbosky.  I was in college when Perks came out.  While I thought the writing was a little too simplistic, I felt that I understood Charlie. I now realize how adept Chbosky is in his character development. Charlie’s letters sound completely authentic, even today. He never came across to me as autistic, as some have characterized him, just really bright, observant, and kind. His lack of friends, somewhat cold parents, and self-absorbed siblings explain his nativity. He loved his aunt, and when she died, he was left emotionally stunted.   I did not think Chbosky went overboard with the teen issues.  A lot happens in this novel (suicide, physical abuse, homosexuality, drug abuse), but Charlie is just observing the world around him.  He has sought out the most interesting people in his school, and he is better than most of us at paying attention to what is really happening. The overall message is fairly simple: be yourself and don’t be afraid to tell others how you feel.

This novel is not life changing for me, but I do think it’s insightful and interesting. For the past 10 years, it has been among the top 10 most challenged/banned books in the United States, and my rereading has convinced me Perks is worth a good censorship fight. The issues presented are handled realistically without judgment.  I look forward to seeing the film adaptation.