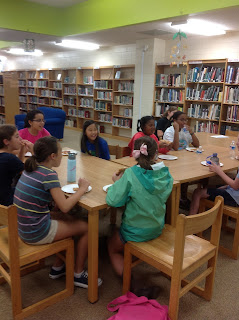 Our middle school bookclub had its first meeting of the year today to discuss R.J. Palacio's novel Wonder.  I selected this title over the summer after reading an advance copy from Netgalley.  The book has a compelling main character and lots of material for discussion.  In Wonder, Auggie Pullman just wants to be considered a normal kid, but he was born with a genetic defect that caused him to have severe facial deformities.  In trying to protect Auggie, his parents have home-schooled him, but they realize that they cannot shelter their son forever. The book begins with Auggie enrolling in a school for the first time in 5th grade. Told from numerous perspectives, Wonder follows Auggie's ups and downs as he tries to get others to see him as he sees himself: just an ordinary guy.

The lively discussion group consisted of twelve girls and two boys in grades five and six.  I moderated the conversation along with one eighth grade student.  Though some teachers wanted to join our group, I wanted to invite just students for the initial meeting to allow everyone to feel comfortable speaking in a group.  Students had to sign up in advance, and I provided pizza.

The overall consensus was that Wonder is a great book.  We had a lot to discuss, and everyone had opinions.  Students loved Auggie, and many stated they are better equipped to approach people with physical differences now that they have read this story.  Wonder is an excellent novel for teaching acceptance and works well as a bookclub selection.

Here are our discussion questions:

2.   Did you have a picture of Auggie’s face in your mind while reading the book? Have you ever encountered a person with facial deformities?  If so, how did you react?  Would you behave differently now that you have read Auggie’s story.

3.    Did you find Auggie an interesting character?  What did you like or dislike about his personality.

5.   Many reviewers have criticized Daisy’s death.  Was it necessary for Auggie’s dog to die? Did the death add to the story?

6.   How did you react the use of letters, emails, Facebook posts and text in the story?

7.   The story is told through many different perspectives.  Is there a particular perspective that you liked or one that you did not like?

8.   Is Mrs Albans’ attitude towards Auggie different from the way that children treat him?  Do you think there should have been a chapter from Mrs Albans’ or Julian’s perspective?  Do you think she is correct in saying that asking ‘ordinary’ children, such as Julian, to befriend Auggie places a burden on them?

9.  What did you think about the use of precepts in the novel.  Was there one that you really liked? Do you have any precepts of your own?

10.  Many people believe this novel is a frontrunner for the Newbery medal.  Do you think it deserves to win?

Our November bookclub title will be Rebecca Stead's Liar and Spy.