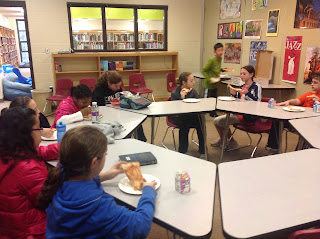 Yesterday the Middle School Bookclub held his monthly meeting to discuss Jennifer Nielsen's fabulous fantasy novel The False Prince.  In the book, three orphans are adopted by Connor, one of the king's advisors.  King Eckbert, Queen Erin and the crowned prince Darius were recently found poisoned, and Connor is trying to keep their deaths a secret to buy himself some time.  Years ago the king's youngest son, Prince Jaron, was believed to have been killed by pirates at sea, though his body was never found.  Connor is hoping to quickly transform one of the orphans to masquerade as the lost prince.  He believes that by claiming he has found the rightful heir to the throne, the country will not break out into a civil war and he will be able to control the kingdom through his false prince.  The story is told from the viewpoint of Sage, one of the orphans.  Unlike Rodin and Tobias, Sage does not want to become the prince; however, he knows that Connor will pick the boy who is the most convincing match for Prince Jaron and the other boys will probably be murdered to hide the secret.  Sage has no choice but to go along with Conner's scheme because he has no intention of dying.

This action packed novel was a favorite with our bookclub.  They loved the humor, adventure and mystery.  Many of our members commented on how well the characters were developed, especially Connor, and they can't wait to read the sequel, which already has a long waitlist.  The False Prince is an excellent pick for middle school bookclubs.  It appeals to both boys and girls across many grade levels. It is also a quick read with plenty of topics to discuss.